You are viewing this site in staging mode. Click in this bar to return to normal site.

Major (T) Archibald Henry Pingston Davey was killed in action on the 14 October 1917 aged 36. He was serving with the 1st Bn.  Royal Guernsey Lt. Infy. A shell burst and he was fatally wounded. An account of the action can be read here.  He is buried at the Cement House Cemetary, West-Vlaanderen, Belgium. His grave inscription reads “… AND SUCH A DEATH IS IMMORTALITY”.

Archibald (1881) had 3 brothers, Harold Wm (1880), Ernest D. (1883), and Reginald H. (1889). He also had a younger sister, Winifred E. (1887). In 1891 the family was living at 793 Hazleshursh, Marton Hall Road, Wimbledon. By 1901 the family are at “Uplands”, Merrow Road, Merrow, Guildford. Harold is working for his father, Archibald & Ernest are training as articled pupils in Civil Engineering & Chartered Accounting, and Reginald & Winifred are not living at home. Reginald is 1 of 9 pupils at 17 Oval Road, St Pancras, and living with Benjamin Ralph, a Schoolmaster & Dir of Laws. Winifred is boarding at Harrogate Ladies College, 1 of 37 pupils, living with the Headmistress Mira Jones, and a number of teachers. Archibald is living and working in Guernsey as a Civil Engineer by 1911. His parents are at “Woodlea House” on Lyford Road. Winifred is living with them aged 24. Harold has set up home at 73 Loxley Road and is Secretary to a Joint Stock Company & Secretary in a Firm Of Engineers. Archibald married Hester Perry Gotch in Kettering in last quarter of 1914 at Kettering.

In relation to his siblings, Winifred E Davey married John Charles Gibson in Wandsworth on the 4th July 1918. John seems to have been born in Kettering, and was a Weslyan Minister before the war, serving as a Chaplain to the forces between 1915 and 1919. Although not living in the Parish, Ernest & Harold can be found still living in Surrey on the 1939 Register. Ernest is a Chartered Accountant, married with a family, and Harold is married and described as a Chartered Secretary.

Reginald  joined the 6th Battalion (part of the Reserve for Home Defence) Essex Regiment as Private (2047) in 1914, and by early 1915 gained a commission as a Lieutenant with the Royal Guernsey Light Infantry. He served through France and Flanders. In 1918-19 he had a telephone installed at “Woodlea House”. It is likely this was for his parents’ use. He may have become mentally unwell and took his life, on the 28 November 1919, in France. He is buried at the Terlinchun British Cemetary, Wimillie, Pas de Calais. His inscription reads “UNTIL THE DAY BREAK AND THE SHADOWS FLEE AWAY”

Further research shows Reginald went to The Leys School and he is commemorated on the Leys School War Memorial. He was in the same year and House as Bernard Henry Holloway. Here are some of the additional details they give: Reginald came to The Leys in 1905 at the age of 17 and went into North A House. On leaving school, he worked as a Civil Engineer and was an Associate Member of the Institute of Civil Engineers.

Although Reginald is not commemorated on the SMM Memorial, both brothers are commemorated together on the Channel Islands and Great War Memorial website. 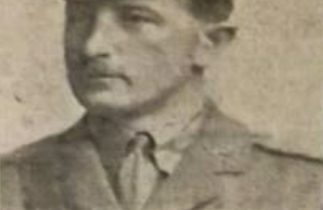